Do you really know all the benefits of green roofs?

Green roofs have recently gained great attention of urban planners and architects – mainly because of numerous social, economic and design-based benefits they bring to public, private, economic and social sectors, and even more important, to local and global environments.

You’ve all heard about how green roofs go beyond the meaning of contemporary architecture and give a new value to the role of buildings within urban planning. You also know they are designed not only to bring back the natural element in the urban environment, but also to provide solutions for important issues such as urban heat island effect and stormwater management. 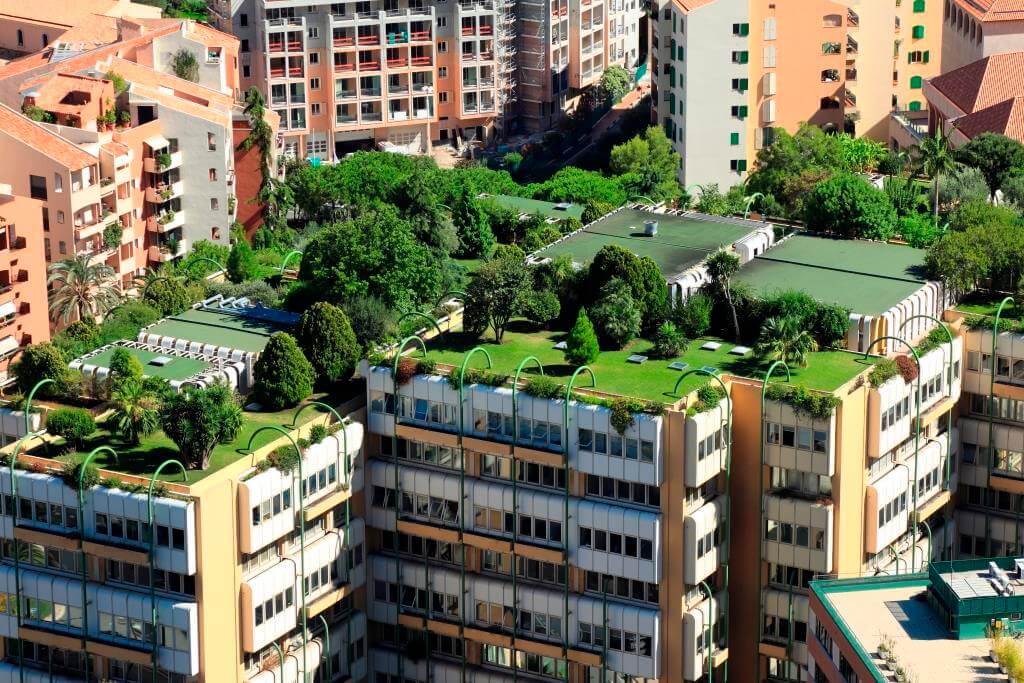 What about other benefits? Do you really know it all?

Let’s check all 3 categories of green roof benefits – environmental, economic and last but not least, social benefits of vegetative roofs…

Green roofs are one of the most effective ways to reduce the ambient air temperature in urban areas. During summer the temperatures in cities are approximately 5-7ºC higher than in the countryside due to buildings and roads heat absorption and the temperature on the traditional roof can be up to 40ºC higher compared to the green roof. According to research carried out by the Tyndall Centre for Climate Change there is a need of 10% moregreenery in towns to mitigate the UHI Effecm

A major advantage of green roofs is the reduction of stormwater runoff, which leads to a decrease of the burden on sewer systems by 70-95% in summer. Green roofs have influence on cost reduction due to low orno need for raincatching cisterns and similar equipment which is usually used for stormwater management. Rainwater retention capability helps to limit accidents caused by heavy rainfalls.

Through natural bio-filtration, green roofs prevent contaminants and toxins from reaching streams and waterways. According to Kohler & Schmidt research (1990) 95% of the lead, copper and cadmium sulphide and 19% of the zinc coming from the rainwater remains in the substrate, which helps to improve local water quality.

Green roofs help to reduce the amount of CO2 in the air, which is considered one of the most important causes of global warming. 1m2 of a green roof can absorb 5 kg of CO2 yearly. Additionally, due to reduced energy consumption there is a further impact on carbon dioxide reduction by 3.2kg yearly.* As a perspective, 1m2 of green roof can absorb the same quantity of CO2 as a regular car would emit during a 80km drive.

The plants on green roofs can also capture airborne particles such as smog, heavy metals and volatile organic compounds from the local atmosphere which has a positive effect on air quality and health of inhabitants. Researchers estimate that 1m2 of a green roof can help to absorb 0.2kg of airborne particlesfrom the air every year**.

As urbanisation increases, ensuring biodiversity is one of the key requirements for local councils. Green roofs can provide a habitat for various species and restore the ecological cycle disrupted by urban infrastructure. 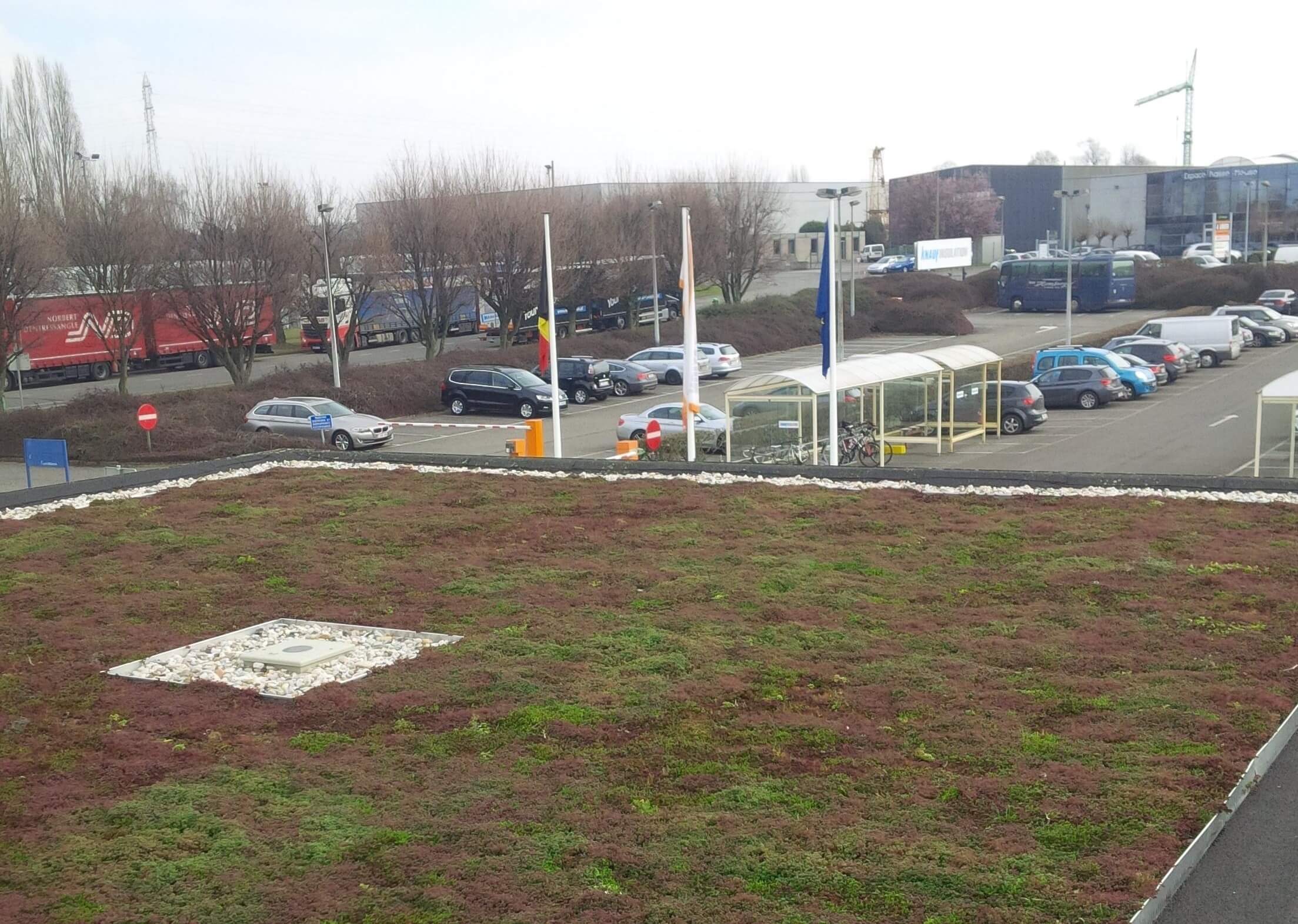 Green roofs have been shown to triple the life expectancy of the roof. The underlying roof materials are protected from mechanical damage, ultraviolet radiation and extreme temperatures, which results in reduced maintenance and renovation costs.

b. Energy efficiency of green roofs

Green roofs help to reduce energy consumption by 40% for heating in winter and by 100% for cooling in summer. The performance depends on several aspects including climate conditions, type of construction, thickness of insulation etc. 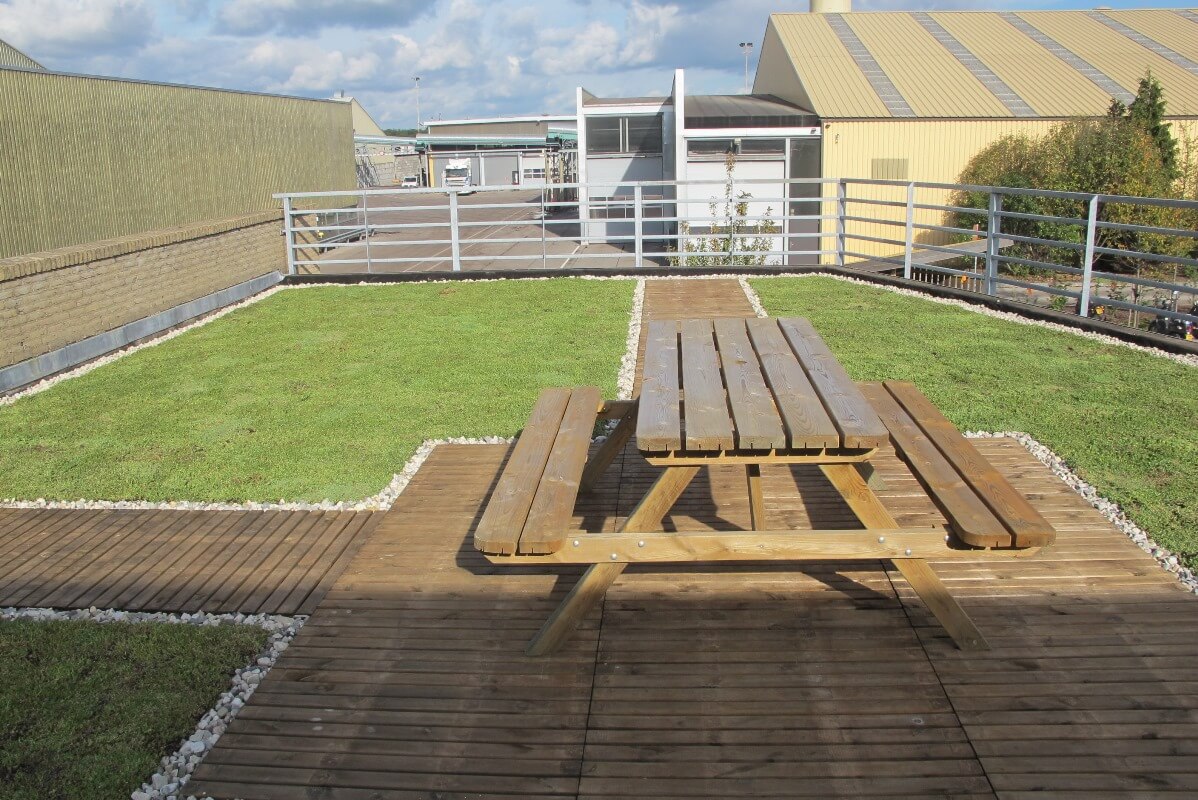 The natural character of green roofs provides relief from the concrete construction in urban areas and introduces substantial changes to modern architecture. According to several studies the presence of green areas has a relaxing psychological effect, helps to reduce blood pressure and lowers the heartbeat. Due to multiple benefits, green roofs substantially enhance residential and commercial property values.

Green roofs can additionally create opportunities for urban agriculture. They can reduce a community’s urban footprint thanks to local food system creation and ensure self-reliance on food resources.