Management of rainwater with Green Roofs

In the majority of developed cities, Green Roofs make up about 40–50% of regulated urban surfaces. The quantity of rainwater from these roofs makes a significant contribution to the total volume of water that is channelled into the sewage network. This is the very reason rainwater is one of the main causes of floods in urban environments. 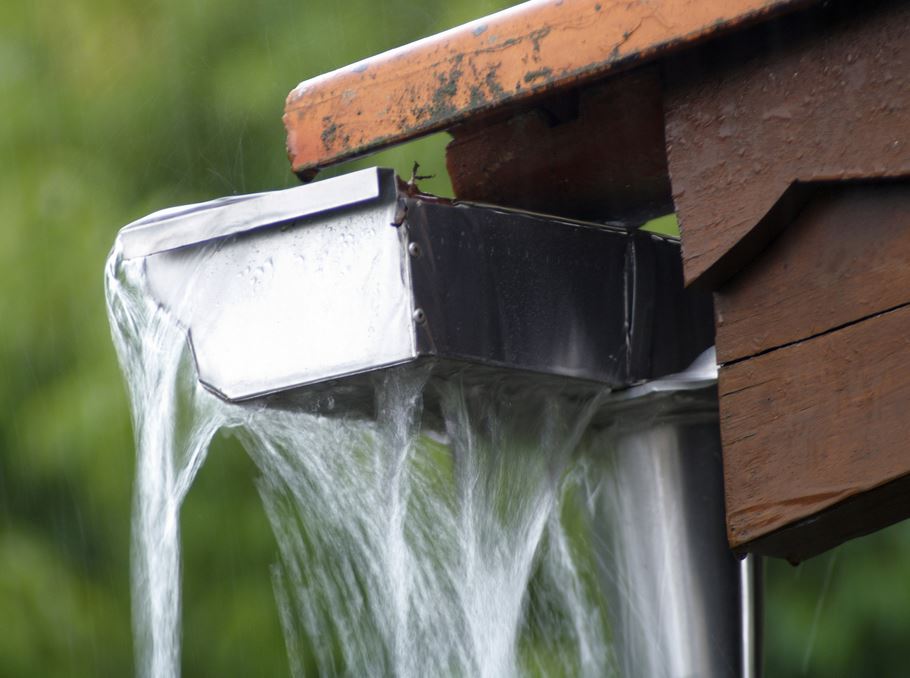 Green Roofs – the key hydrological mechanism for interception, storage and filtration of water

Many European countries have become well aware of the importance of addressing runoff issues and have already started creating legislation to that specific end. In some countries, green roof legislationstipulating that a certain percentage of roof surface must be equipped with a Green Roof System is already in place.

During storms, green roofs represent a key hydrological mechanism that functions according to the principle of interception, storage and filtration through layers of substrate, growth medium and drainage layer. All water accumulated in the system is used to supply vegetation or is lost into the atmosphere as a result of evapotranspiration (transition of water in the form of water vapour from the soil surface and through leaf clefts into the atmosphere) during dry periods.

Green Roofs allow us to create a time lag – a delay in the runoff of water accumulated on the Green Roof, at the same time reducing the volume of water discharged from the system. 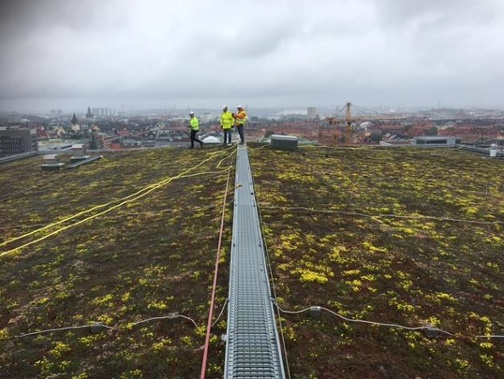 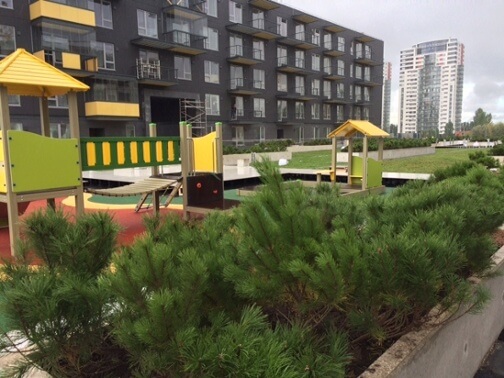 The ratio between precipitation and the volume of discharged water during a certain period gives us the so-calledrunoff coefficient (C). The lower the runoff coefficient (C), the less water, in relation to the amount of precipitation, that is discharged from the Green Roof System during precipitation. Any volume that exceeds the absorption capacity of the Green Roof is discharged with a time lag at a lower flow rate over an extended period of time. The value is determined in accordance with specific protocol which is pre defined and can vary from country to country.

In Germany the short-term runoff coefficient is defined by the FLL protocol in such a way that the Green Roof System (installed with a pitch of 2%) is fully soaked with water. The system is then left for 24 hours; after that time, 27 liters of water per m2 are poured over the surface within 15 minutes. During that time, the volume of water discharged from the system is measured, and the ratio between the added and discharged water is calculated to obtain the value of the C coefficient.

The lab testing protocol are good example how to do it, however these kind of lab tests do have some short comings as they do not consider some important elements influencing the performance of green roof during 24 hour “waiting” period as there are many climate factors affecting the water evaporation from fully saturated green roof like temperature, winds, air humidity…

An example using the Urbanscape Green Roof Premium High System* in Ljubljana provides us with the following data on the volume of water retained in the system: 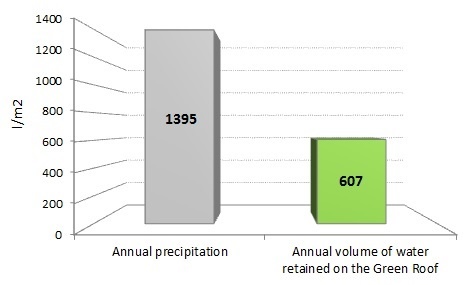 Depending on the system used and the geographical location, as much as 90% of the annual precipitation may be retained on the Green Roof.

In combination with other forms of modern rainwater management schemes (e.g., storage tanks or irrigation systems), the system is able to fully substitute for all water requirements where drinking water quality is not required.

In many cities, proper management of rainwater with Green Roofs on buildings equipped with such systems may therefore lead to incentive programmes, such as those that reduce taxation rates on discharged rainwater.

What about other benefits of green roofs?